As you have seen in earlier posts in the build up to the samurai parade we have been working very hard to prepare and finish the armour in time.

A short video of the coming up to the parade and the post about making the samurai armour.

After the long wait, it’s time to finally march in the Parade!  Held here in Kofu the city of my study year abroad. Convenient I hear you say…

The plan was to wake up nice and early, get the armour on and head into Kofu city centre on the train for the start of the parade.  All was going well with only a few costume hick ups, noting that the master craftsmen couldn’t fix with ease though!

After an hour or two of everyone getting ready, some worry worts putting on diapers, we made our way to the train station.

Diapers I hear you ask, yes diapers… Someone had the bright idea of telling everyone that the parade would last a long time and there would be no toilet breaks. Their solution was to wear a diaper (or 3, literally 3).  Don’t worry I can put your minds at rest and tell you that there were no accidents and everyone got home with a dry bum. Or at least I think they did?

Of course, everyone in Yamanashi knows about the parade, but that didn’t stop the funny looks as we made our way to the train station.

We started at the Prefectural office and marched through the streets to the castle for the opening ceremony. 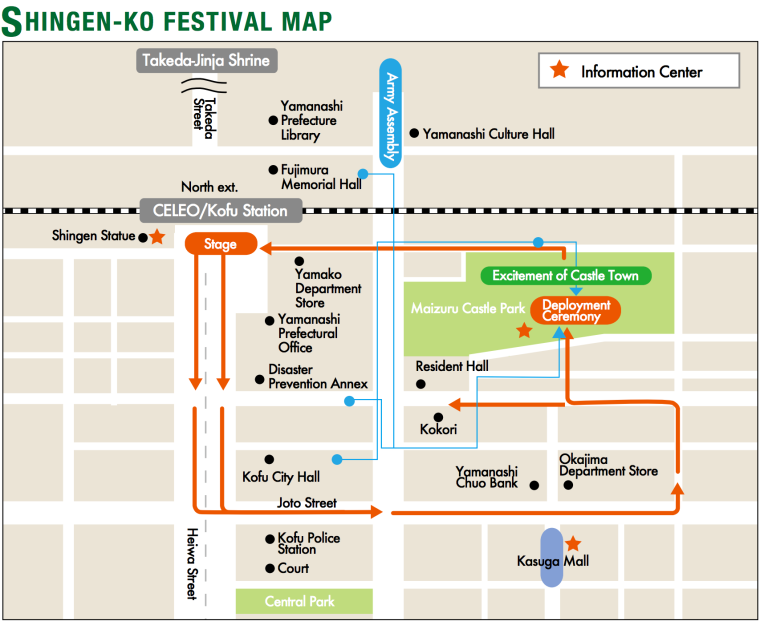 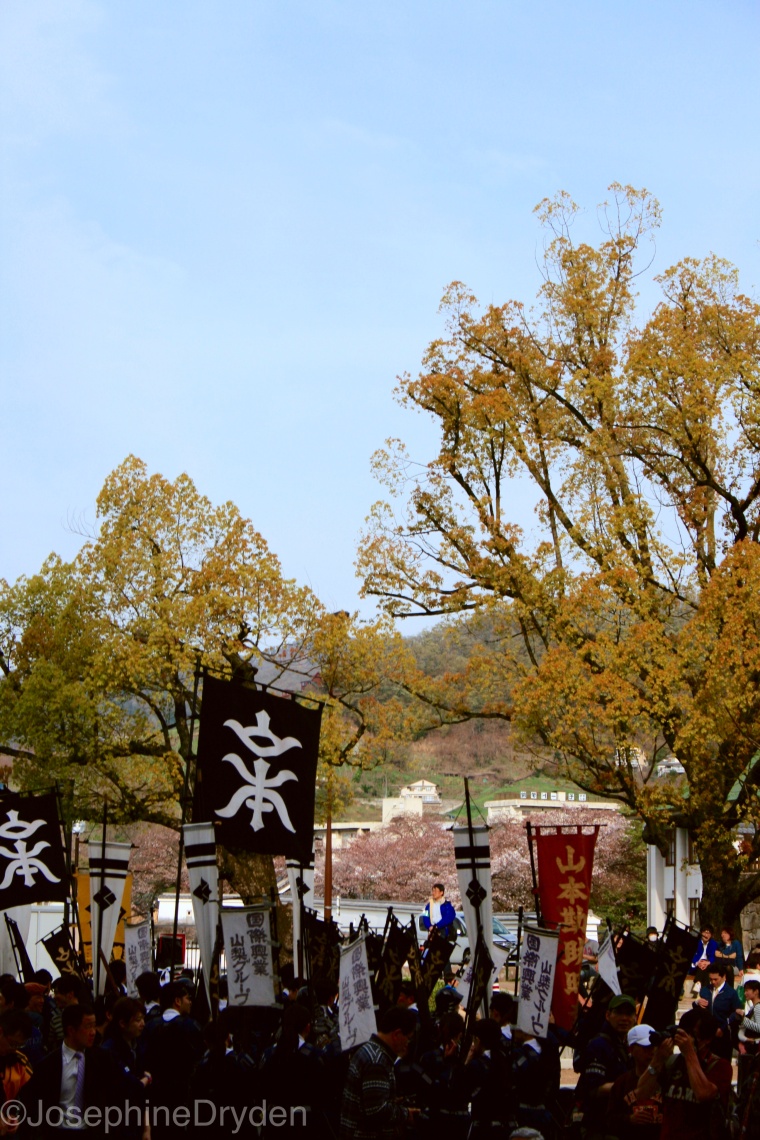 After marching to Kofu Castle we sat down on the green and listened to the opening ceremony! Then it was time for the full parade, marching around the city centre and off to battle we went.

She thinks that’s bad, try living beside him.. 😉 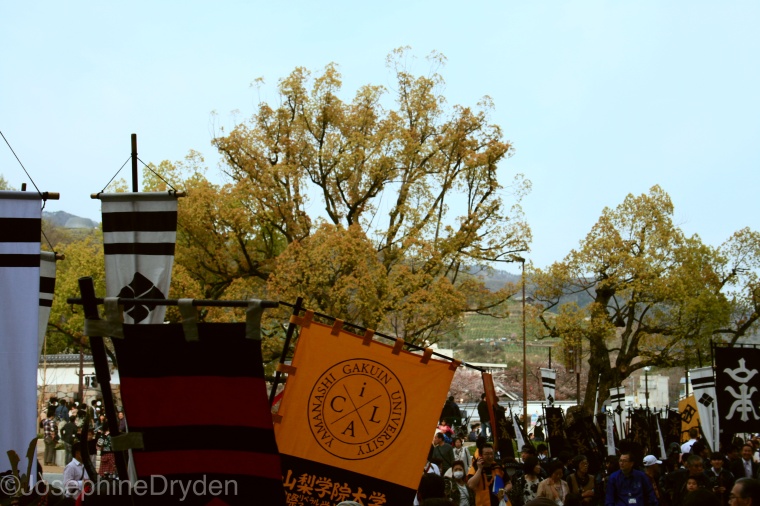 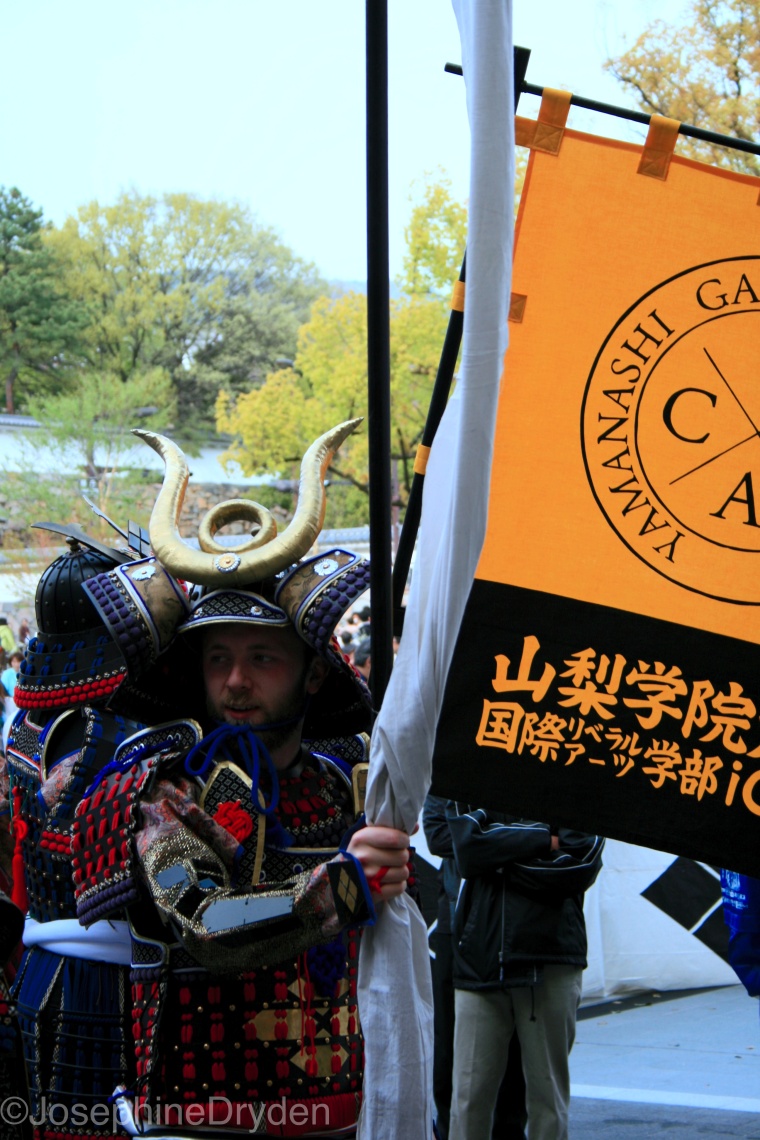 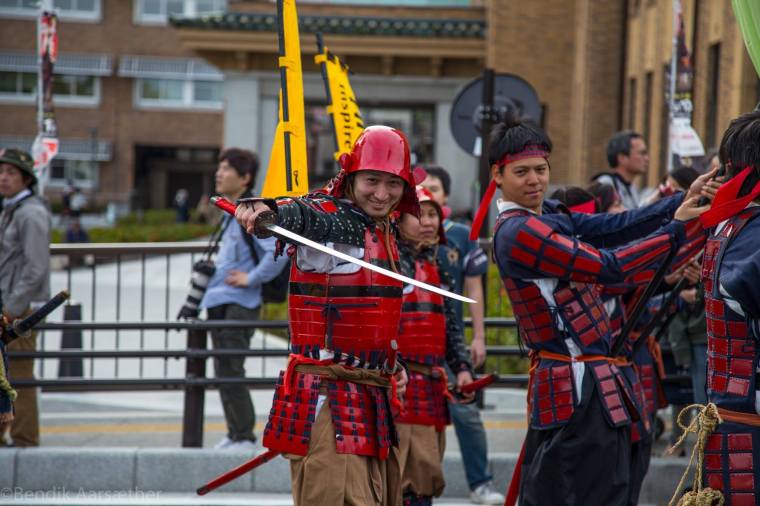 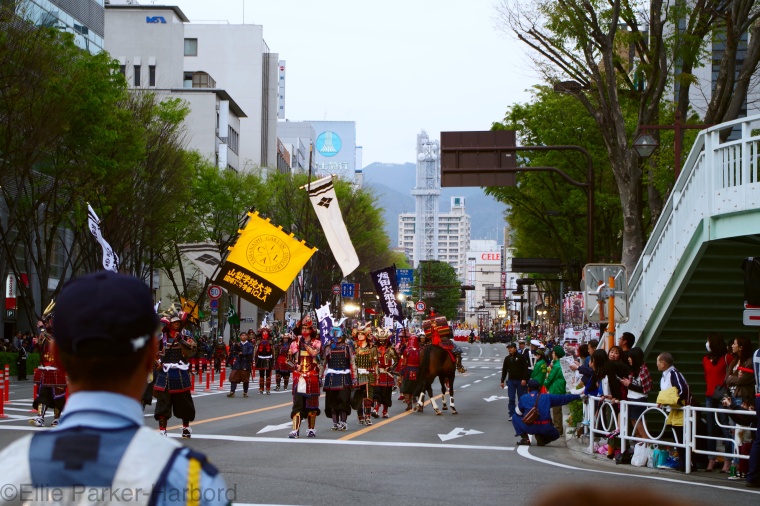 We had the great honour of being allowed to take part in the parade itself, but as if that wasn’t enough we also got to march with this man in our group!

One of the only living decedents of Takeda Shingen. Talk about amazing! 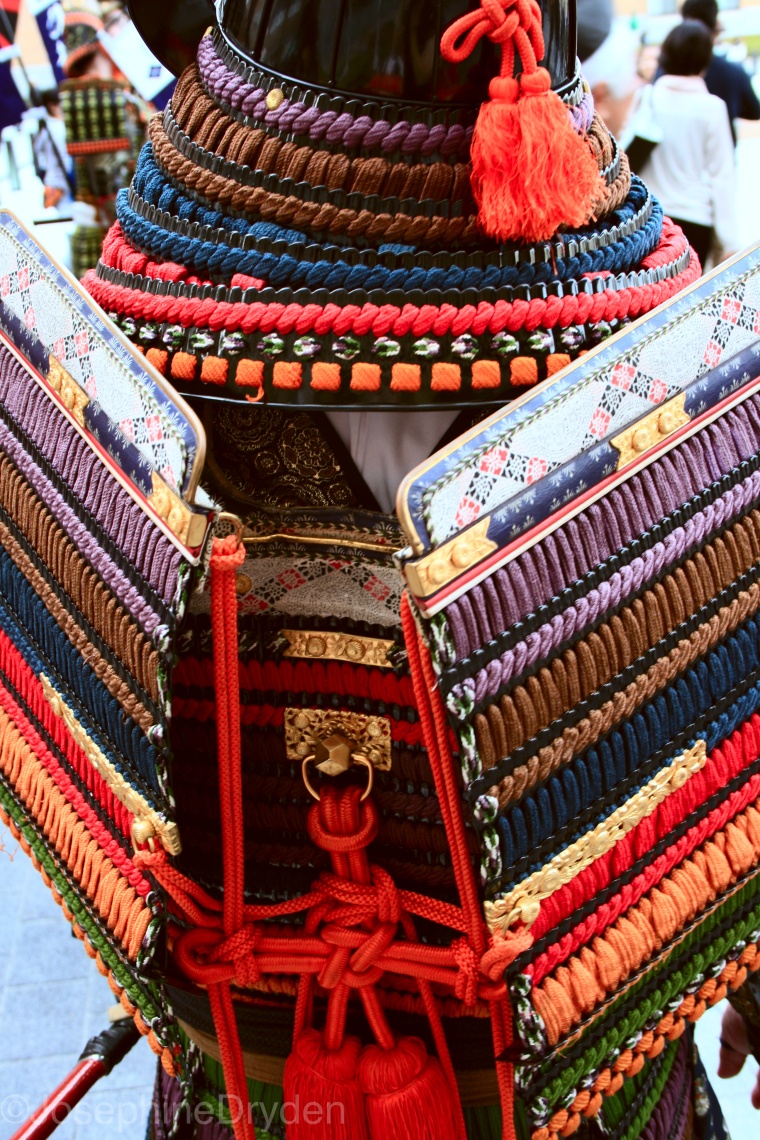 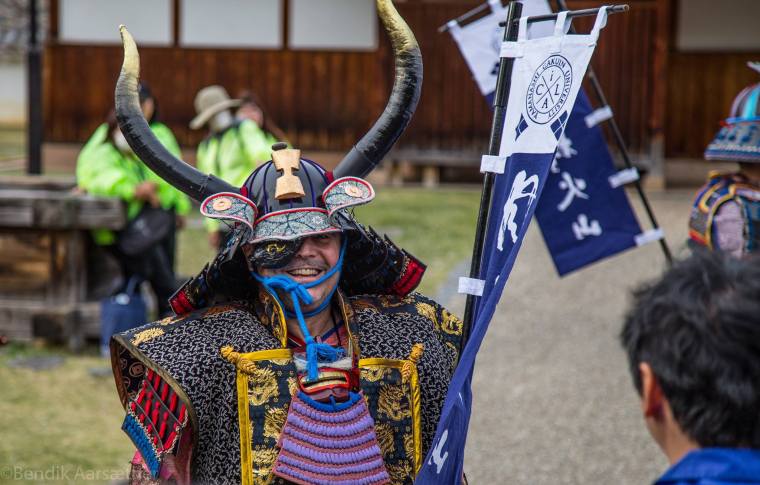 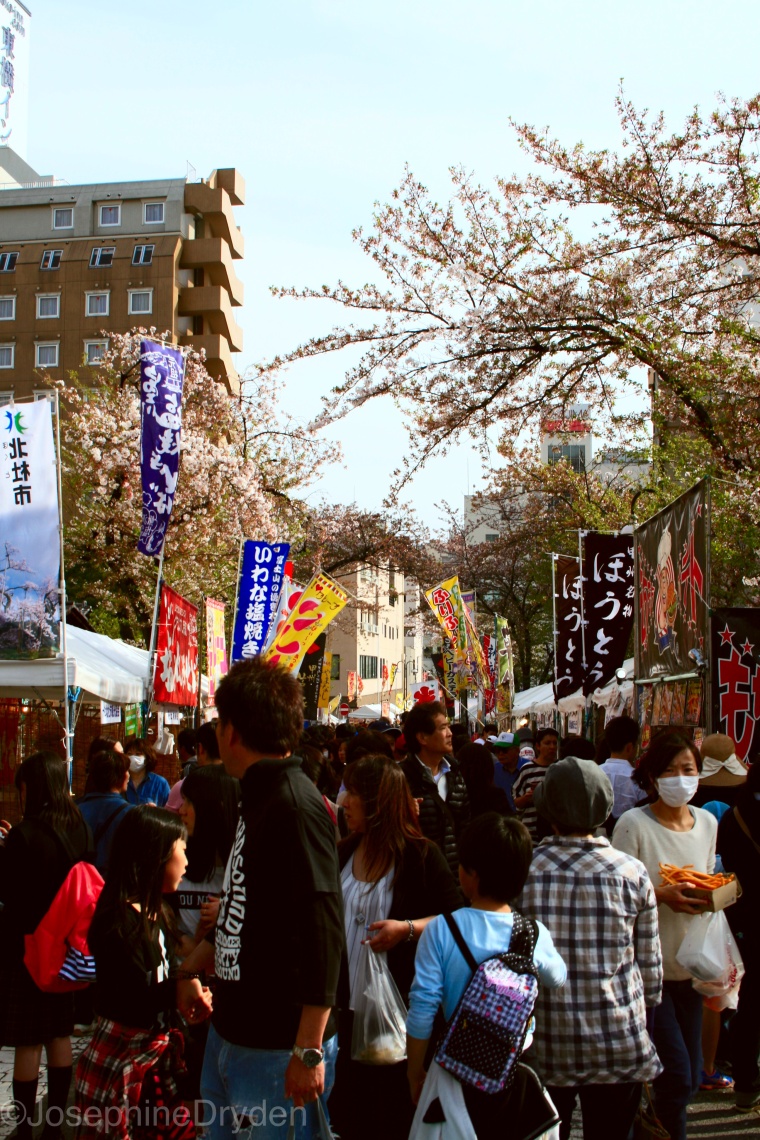 Some of the other performances during the parade. 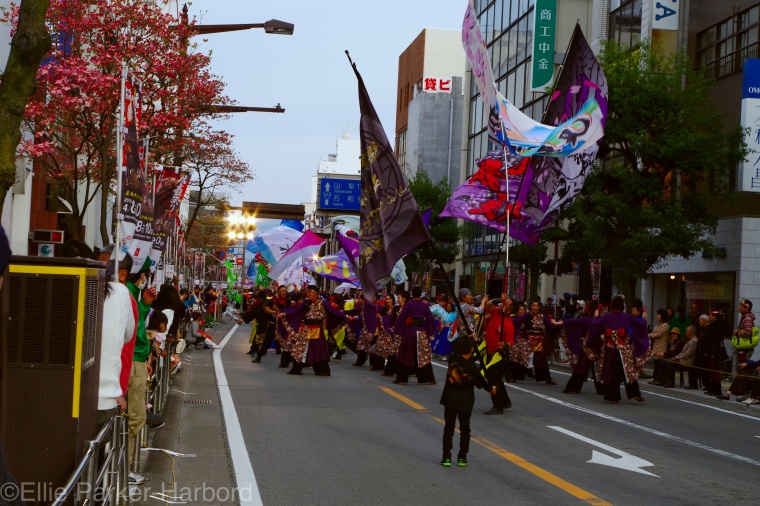 After a few more hours of walking we were back to the starting point and it was time to grab a quick bento, oh and photos! 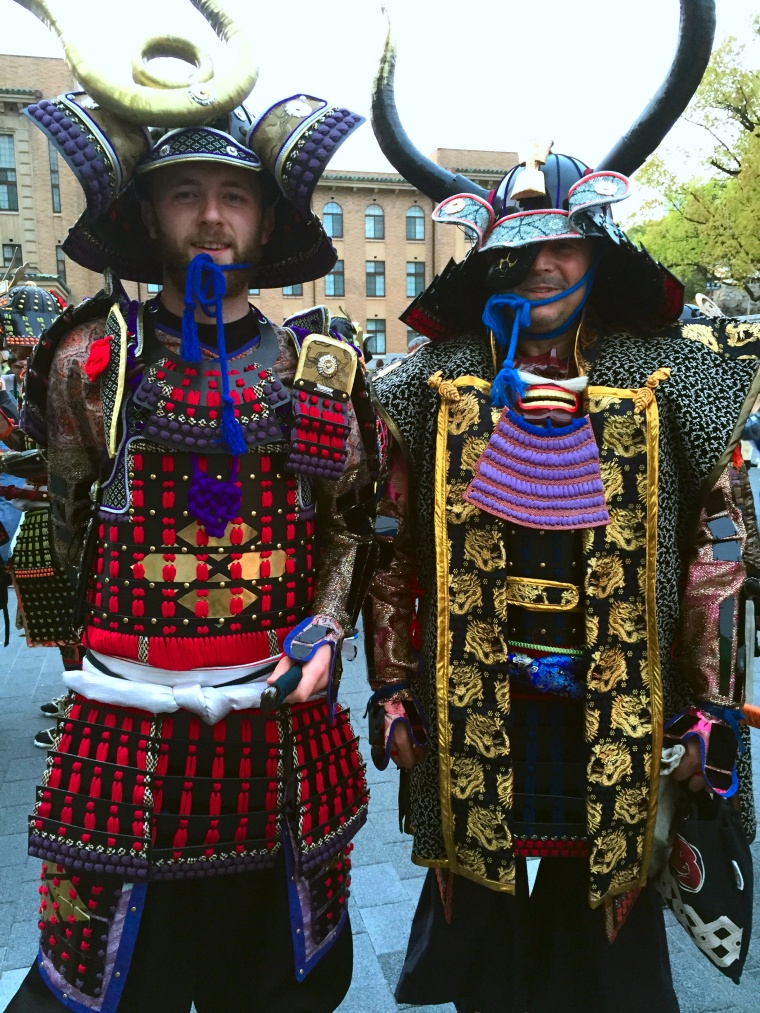 For obvious reasons I couldn’t take any photos on the day, I have been given permission by everyone to use all of the photos and videos that  you see in this post.

Everyone else who helped make this possible

I’ll leave you with this..

I’m trying to catch up and write down all the trips that I’ve been on recently. It’s been a fun-filled month or three of non-stop traveling, day trips and adventure throughout south-east Asia! This will be the first of many to come. The rainy season is about to hit in Japan so that means not as many adventures. But it gives me plenty of time to actually write about the things that I have been up to.  I’ll also be giving you an update on some of the little projects that I have been doing over the last few months.

So back to Shibazakura!

Just to point out, as I’m sure you have already noticed, ‘Zakura’or ‘Sakura’ has appeared again.. I think it’s kind of a rule if it is pink and something to do with nature it is called Sakura as I told you before this literally means cherry blossom, but in this case it will be used to describe the colour, not the species. Shiba, in this case, means moss and translates to cherry blossom moss or pink moss.

Again I find myself around the beautiful lake area located at the base of Mount Fuji it is one of the most beautiful places in Yamanashi. Especially at this time of the year (if you can get over the tens of thousands of tourists going there) this festival quite stunning and a fitting end to the cherry blossom season. It lasts for around two months but it is at its height in the last two weeks of April, after this is golden week and we will talk about why it’s not a good idea to go then…. After Golden Week it is still in bloom but not anywhere near the full bloom of before Golden Week!

I decided I should do something over Golden Week as I didn’t really have any plans and most of my friends had other plans. So I just decided to get up and go. I set off bright and early, catching my 8am train from Kofu. When going from Kofu you need to make a change  there are two different trains you need to get, first to Otsuki, then to Kawaguchiko. During the Shibazakura Festival there are shuttle buses that leave every half an hour and take you on the short journey to the field.

Oh, I’m not sure if I mentioned but, it was Golden Week here in Japan. For any of you who don’t know what this is, don’t worry, I will explain…

So basically Golden Week in Japan falls once a year and last for a week (kind of). It is different every year, as it can fall on different dates, but this is one of the only annual holiday weeks of the year in Japan and everyone is doing something. Golden Week is a collection of four national holidays within 7 days, so basically everywhere that would normally have a lot of tourists has 4 times as many. Be warned, I didn’t believe it until I experienced it…

With that in mind, back to the story. So I got off the train and headed over to bus stop seven. Walking past a huge crowd of people thinking nothing of it. I headed to the stop and the ticket booth only to realise that the line I just walked along beside was the one for the shuttle bus. Shit, I was going to miss this bus and of course, I did, and the next one oh and the next one after that. So three buses later I was finally on the road we got out of Kawaguchiko and about 10 minutes into the 30-minute journey when we hit the traffic for the festival.  An hour and a half later I arrive along with a million (excuse my exaggeration) other people, the place was heaving.

To cut a long story short, this is a beautiful place and festival, just don’t go during Golden week..

All the crappy parts aside. It was rather beautiful in hindsight, I refused to tell myself it was at the time as I was so annoyed with the transport and all the people but looking back it was a rather enjoyable experience! Let’s just have a look shall we? 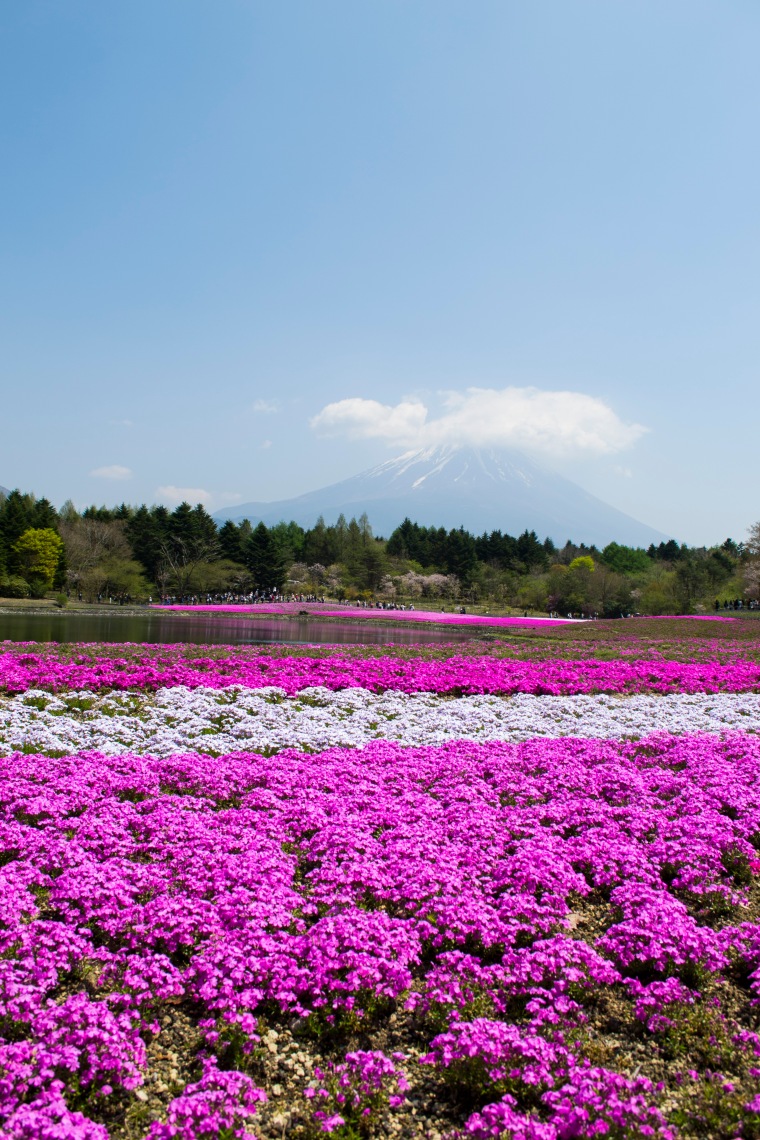 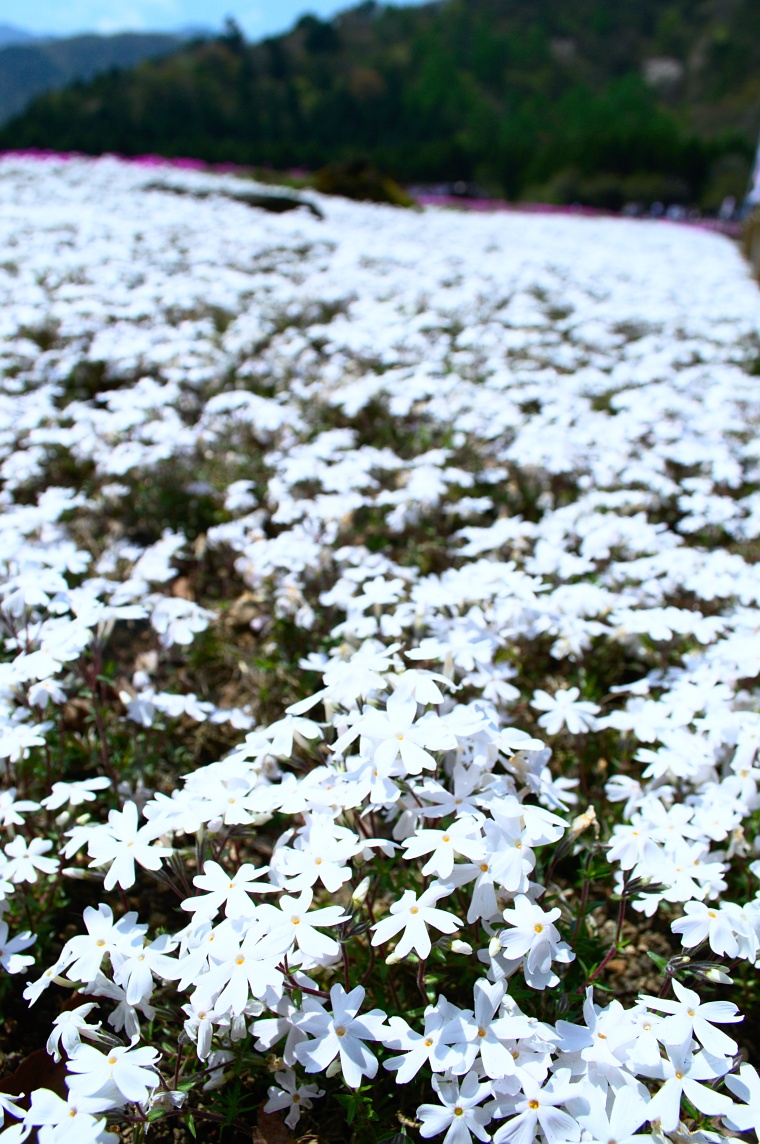 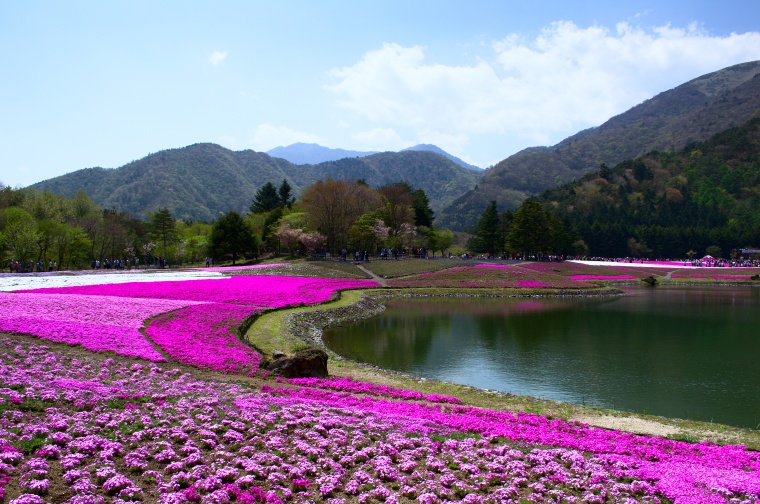 After the festival, I headed to the Ice Caves nearby called  Narusawa-hyōketsu, then went to Lake Kawaguchigo 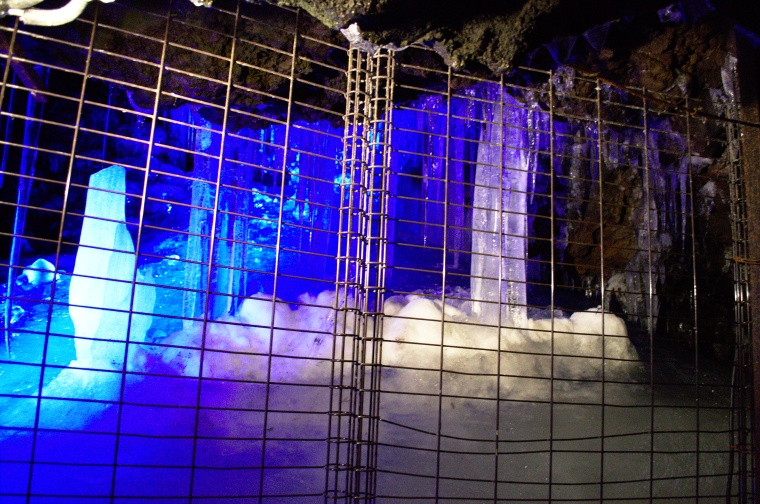 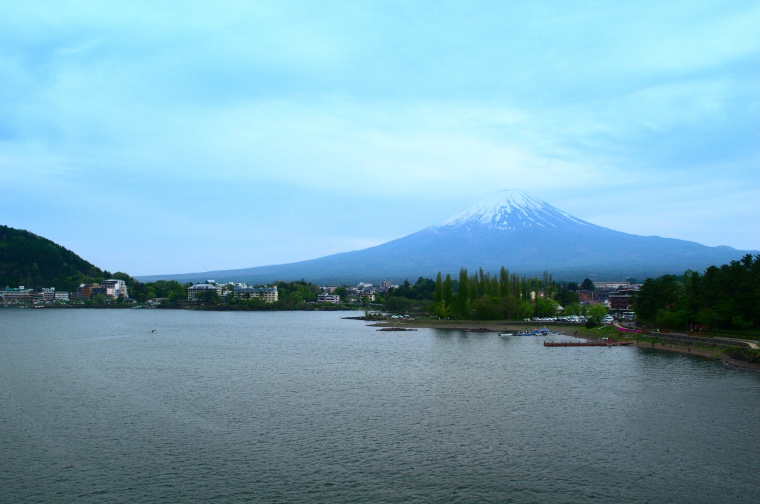 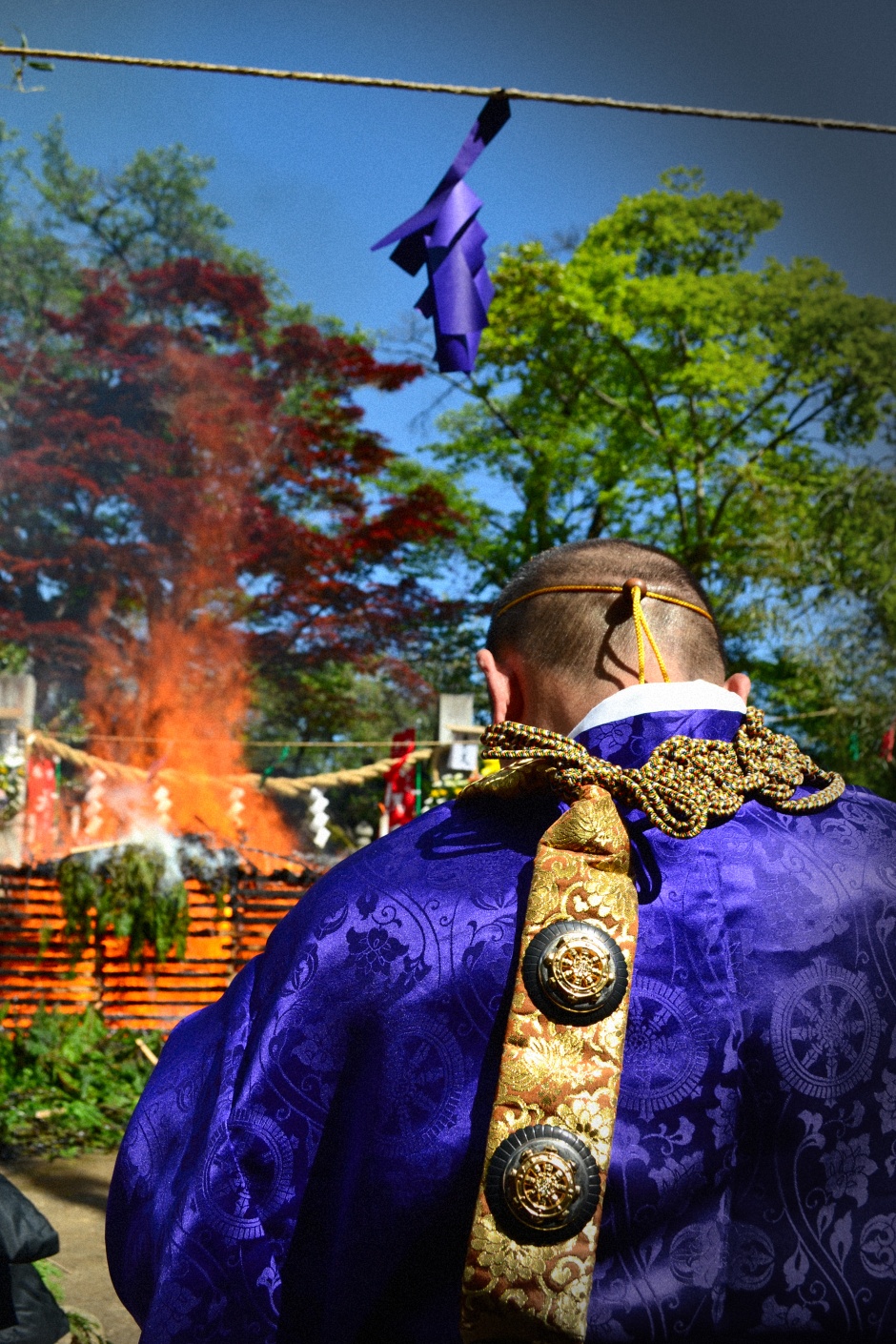 Today was spent at the Buddhist temple Hokoji for the annual Yamabushi fire festival!  Situated in Kōshū, Yamanashi Prefecture, this is a beautiful temple known as the flower temple as it is famous for its year-round flower gardens! 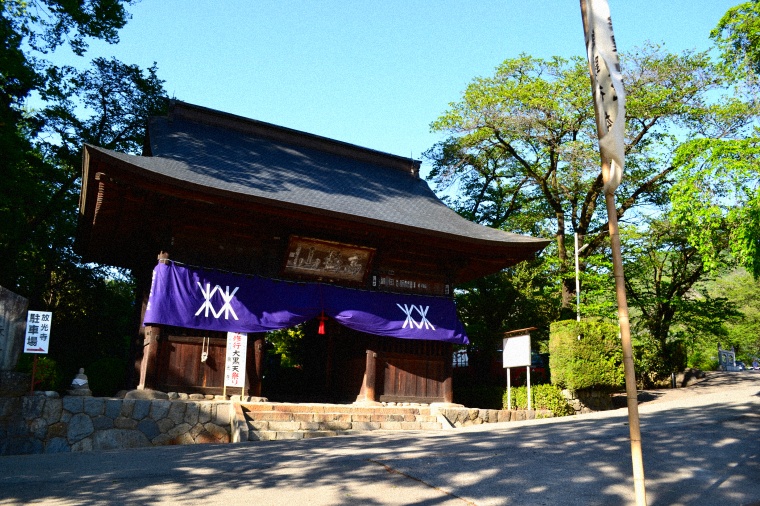 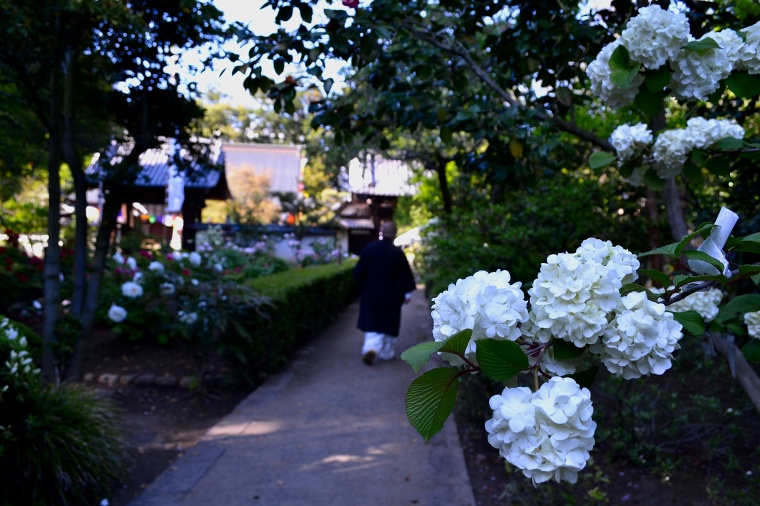 The festival started with a reanactment of hiking up a mountain as it says in the name Yamabushi, Yama means mountain and Bushi is a warrior or samurai! After the reanactment that invovled walking through the town to a locals house and saying some words the main part of the festival began! 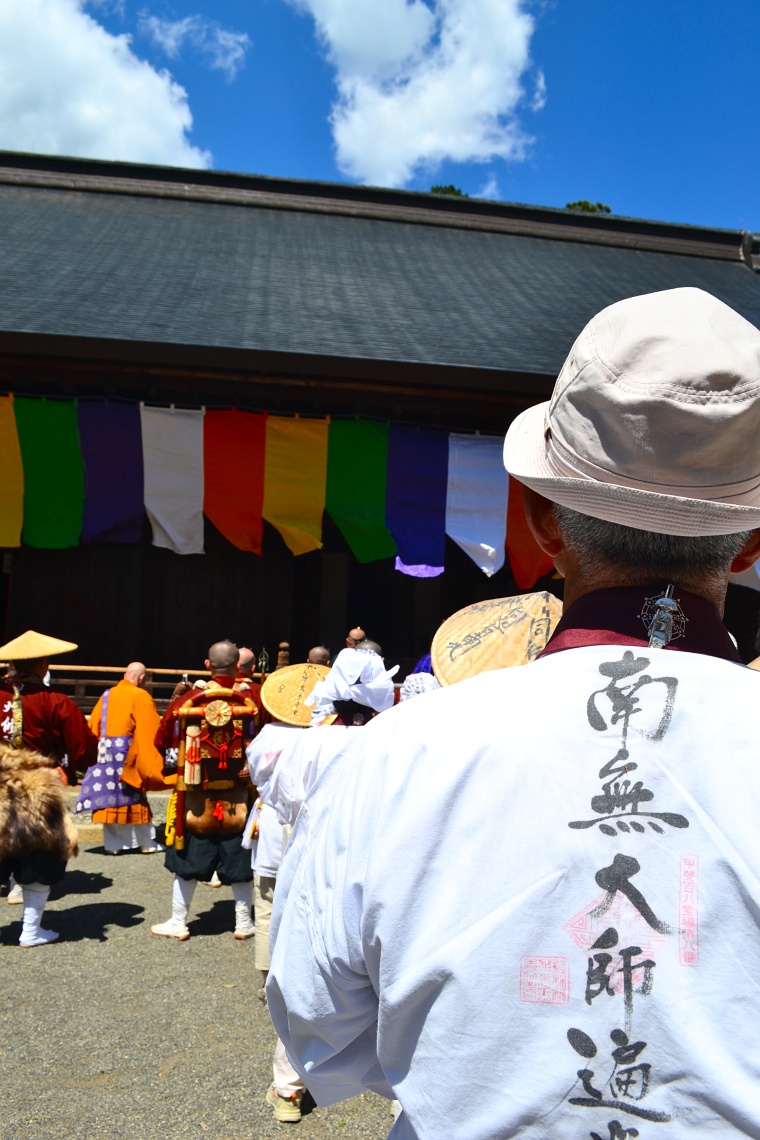 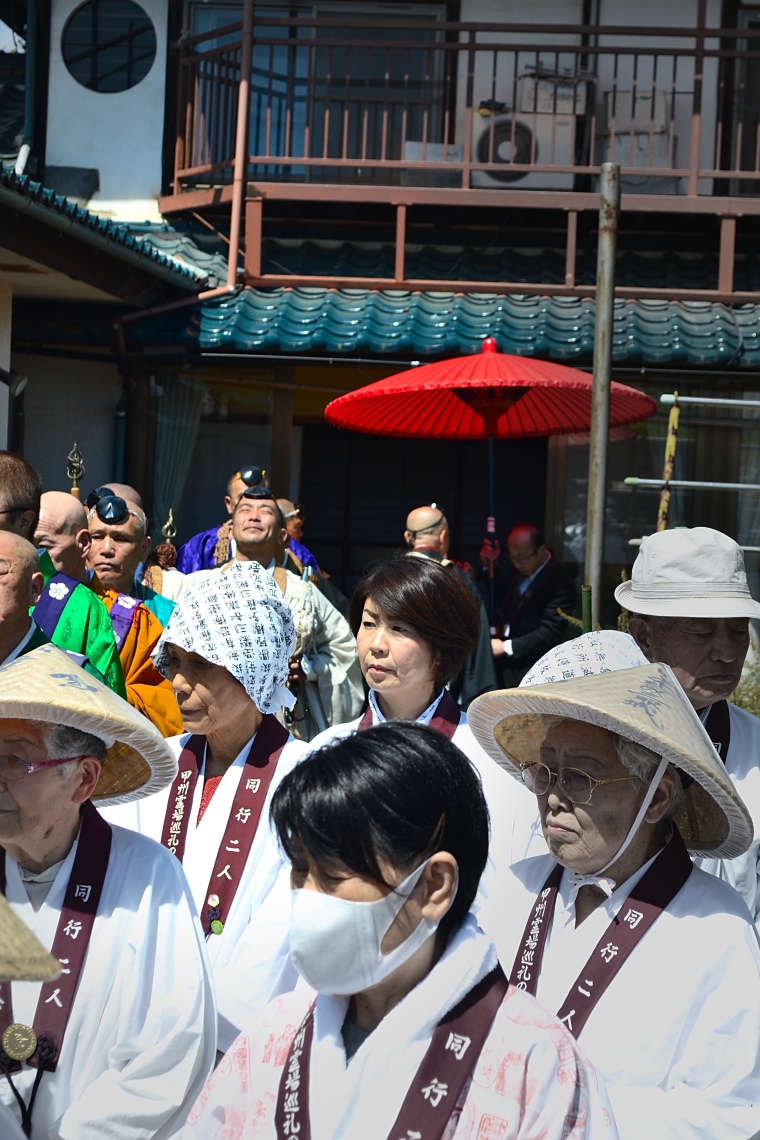 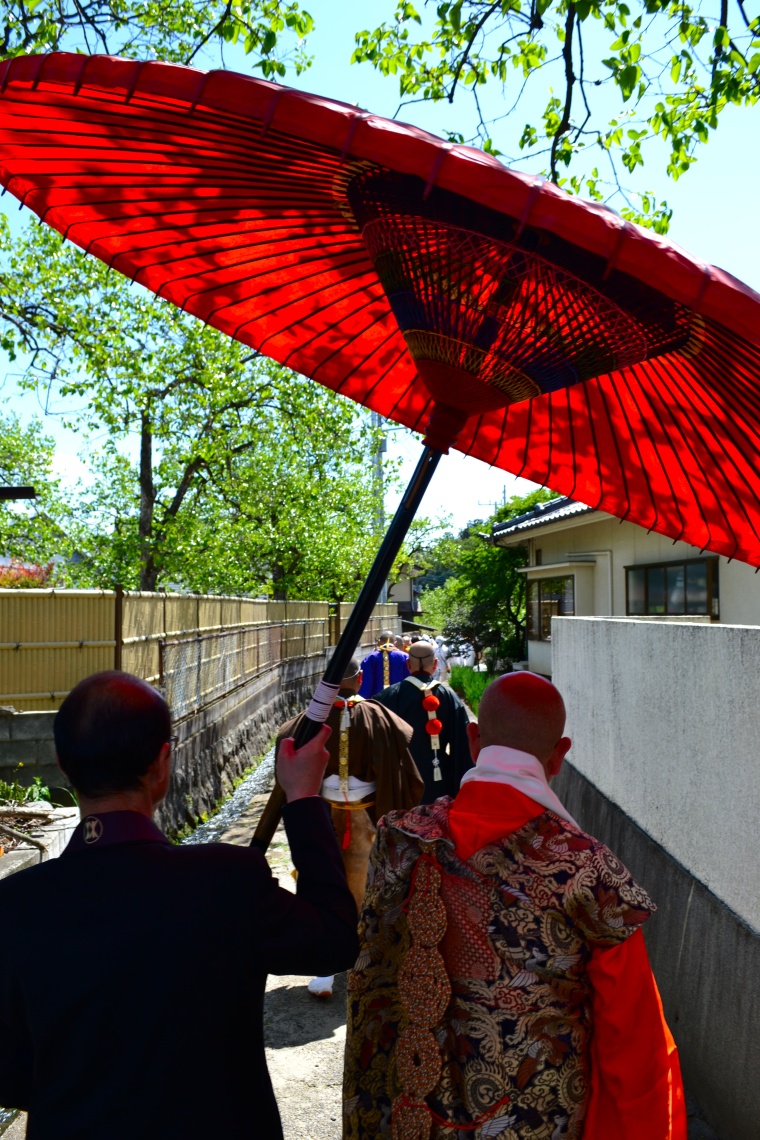 Back to the temple and starting the ritual for the fire to be lit. 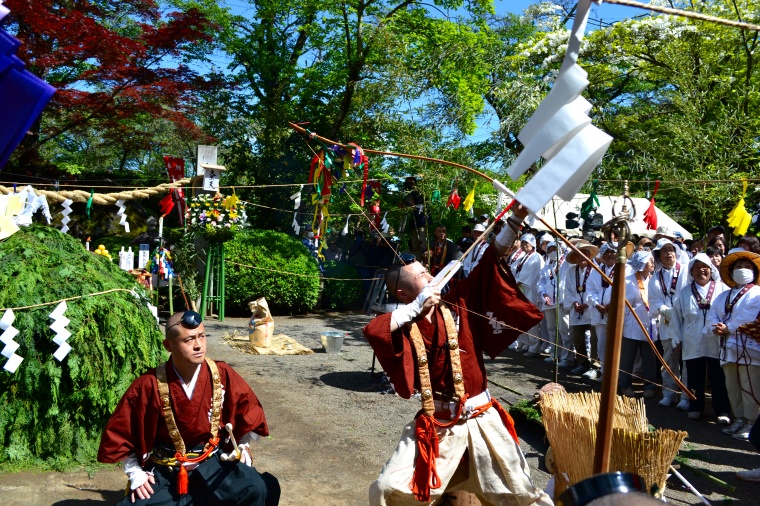 It began with chanting then shooting arrows into the crowd(no humams were harmed in this shooting), then followed by blessings and more chanting. 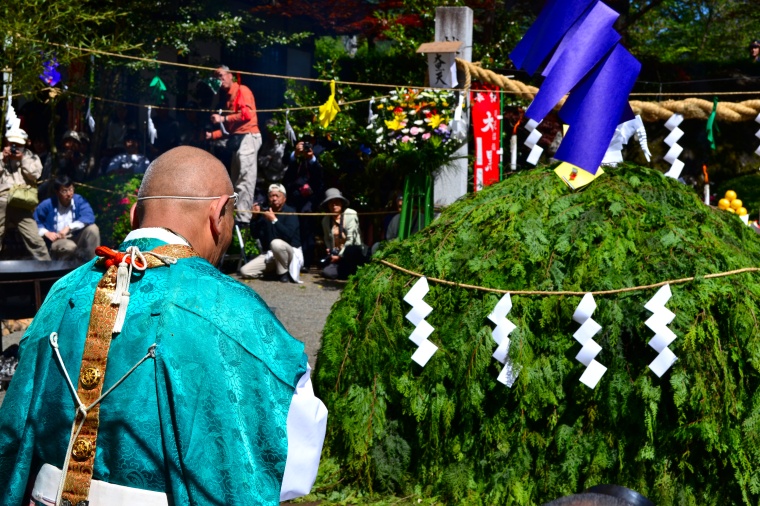 The fire was lit and the clothes started to come off! 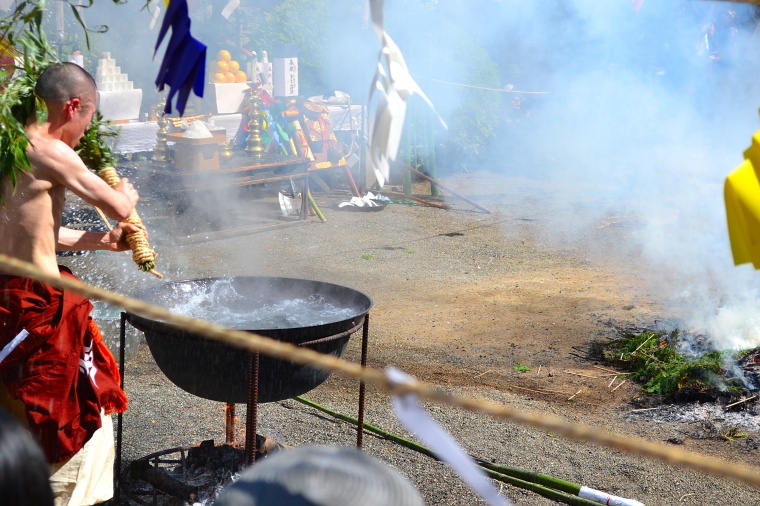 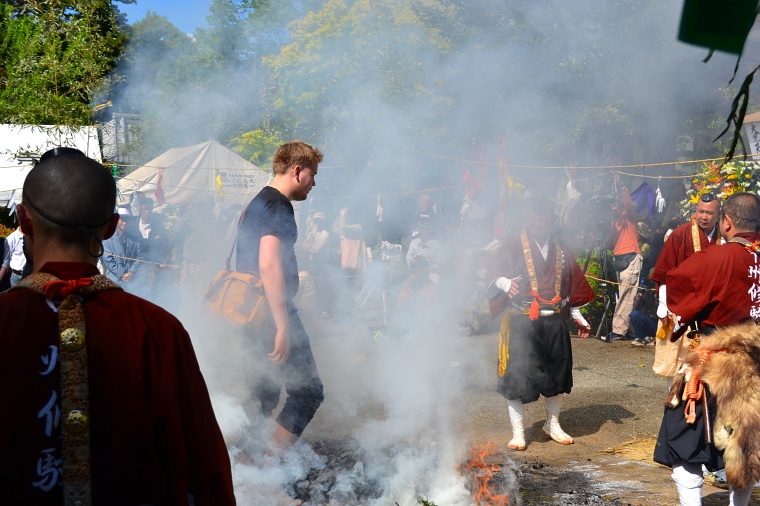 After walking throuh fire we explored more of the temple.

Then it was off to the onsen we go, to wash our smoky bodies and what a view of Fuji-san!

© Stephen Edward Kissick and www.lifesofar.org, 2016. Unauthorised use and/or duplication of this material without express and written permission from this site’s author and/or owner is strictly prohibited. Excerpts and links may be used, provided that full and clear credit is given to Stephen Edward Kissick and www.lifesofar.org with appropriate and specific direction to the original content.
Loading Comments...
Comment
×